Woke up and laid in my bag while the sun rose.   I was sacked about 10 feet from the trail so I figured I’d get up when the first hikers walked by.    Packing was a lot quicker…no tent, just stuff my pad and bag, eat some fig newtons, and get moving.

Goal today was McDonald’s, then start climbing into the Angeles National Forest.    The McD’s is located at the Cajon pass where the trail crossed I-15 at mile 341.8.  It has been talked about for last 3 days like some kind of major milestone.   I’m learning that thru-hikers are funny like that…..the most talked about locations involve fatty food.

The day started with some unburned scrub hiking.   That was nice for a change. 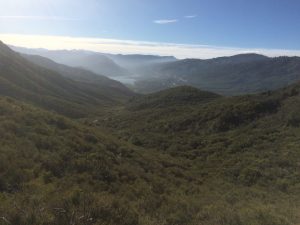 There were some amazing sandy dropoffs on the trail.   It was a little scary with the wind gusting to 50 mph. 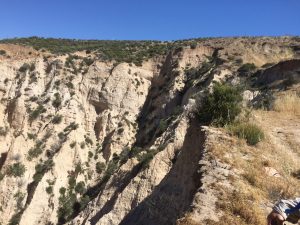 Got another shot at Baden-Powell.

Ran into Zach (now Sizzle), who I had not seen since our run to Sizzler at Big Bear.   We hiked together for 10 miles or so.

He just graduated with a degree in marketing and was interested in the dot-com mania.   We spent a bunch of time talking about the Blockbuster / Netflix case study they teach in business school these days.   Funny that I can still remember working a consulting project in Dallas around 1999 where we were designing a digital delivery model for them.   They shelved it because dealing with the franchises was too disruptive.   10 years later they were bankrupt.   That seems a little more disruptive, no?

There was one crazy spot in the trail where there was a 200 foot stretch of shear drop on both sides.   One side was 400 feet straight down.   The wind still gusting 50+  Crazy.   We loved it

After that it was a decent to I 15.    Can you believe there is an official PCT sign pointing to McDonalds?

We arrived at mile 342 and headed to the golden arches.   It was about 12 by then and it was starving hiker pandamonia.    Every booth had hikers drinking shakes, eating pancakes/burgers/whatever, and charging batteries.

Just for fun, I bought 2 10 piece mcnuggets in addition to my meal.   I anonymously tossed a box on two tables near me to see what would happen.   Table 1 had all guys, table 2 all gals.   One of the guys at table 1 asked “whose nuggets?”, after a 15 second pause everyone there devoured them.   Table 2 (girls) got into a lengthy debate about ownership.   That lasted for 10 minutes, until a consensus was reached and the nuggets were consumed with a velocity similar to table 1.

I’ll have to run that experiment again sometime.

Ended up hanging out with Tim and Sharon who I had met briefly before Big Bear.   Her kids are out of school and they are moving from Orange County, CA up to Seattle.   Both quit their professional jobs and are just going through a reset.   I think Sharon is having a rough time of it…she is in shape, but the pack weight and daily abuse is rough.  Both are determined, so I think they’ll be out here for a while.   Probably see them again.

I decided to check into a hotel here today and take a lower mileage day of 12 ish.    Storm coming in tonight and I don’t feel like doing another 5 miles just to get rained on.