Woke up a bit late. Last night I set my tent on a slope so my legs were elevated. Trying to keep the swelling down on the right one. Seems to work, but every time I roll over, I slide downhill until my head is surrounded in tent. Maybe all that blood flow to my brain is making me smarter 🙂

I hiked with a couple of guys for a few miles. Turns out one of them was a dude I ran into during one of my worst days days where I got lost over and over again. I had intersected him after saving No English from a similar fate. He has been hiking 10 to 15’s the whole trail….slow but steady I guess. Would have liked to chat with him longer. He is from Torrance and had a lot of interesting stats about his generation (he is 23). Said that Millennials are generally not interested in restaurants and night clubs, preferring to cook in with a group of friends. If folks are ordering stuff from Amazon AND not going out to eat, a lot of traditional retail businesses are drying up. Knew that was the trend, but I wonder how folks actually socialize with strangers. Maybe it is replaced with all the social media outlets. 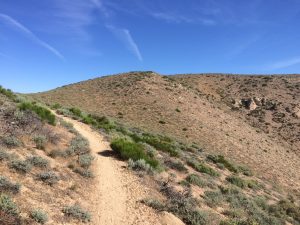 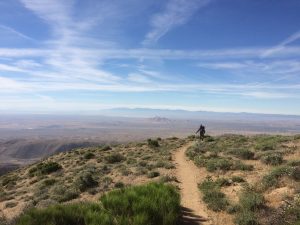 I outpaced those guys and hiked a bit with a couple of gals who just graduated from college. They decided to start at Tehachapi for their thru, so this was the first day on the trail. One graduated in environmental science and was doing some research for the forest service, which she will continue when she gets back. Her research is tree coverage in the Philadelphia area for each decade from the 60’s to today. Looks at old photographs counting 10,000 points in each decade. Covered 7,000 so far. Apparently it has increased from 17% to 23% today. So I guess that is good.

Arrived at Golden Oaks hot, exhausted, and thirsty. Had maybe a liter left. There must have been 20 folks all clustered around the water. Small flow coming out of a plastic pipe into a big concrete trough. There are tadpoles and scummy algea growing all over it. Fortunately the the flowing water was clear, so I filled up and lounged with the rest of the crew.

There is a dude there who has been barfing for the last day or so. He definitely caught something nasty….which I don’t want. Most of us are thinking the same thing. There is a 5 foot open space around him. Heh.

Loaded up at 5ish to do a few more miles. Hooked up with an English dude named Mayo and a guy named Baton for the last 2 miles. Mayo and I camped at a spot around 587 next to a load of windmills. Mayo is an interesting character. Just retired from the National Health Service. He hiked the AT about 10 years ago and wanted to do another one, so here he is. Gave me the scoop on hiking Scotland. Says that it is nice in May and June. After that, you are followed by a cloud of these biting bugs that rise up from the ground to follow you around. I’ll definitely remember that.

These must be older versions of the wind turbines. The things are loud. Sounds like I’m next to a factory. Mayo says I should imagine it the air conditioning in a hotel room. Whatever.

16 miles today. My mileage is sucking.

It is getting hard to adjust being in a different hiker bubble. All the folks I got to know over the past 4 weeks are now way ahead of me. Now I have to learn a whole new set of names again.

Alice and I left the house at 3ish to head back to the trail near Tehachapi. I was driving. Alice doesn’t like canyon roads, so I tried a different route on the 5, down the grapevine, and catching the 58 South of Tehachapi. That turned out to be a bad move. It added an extra 1 hour to our trip and 1.5 hours of Alice complaining. She thought I had some secret agenda (I didn’t).

Finally we got to town and headed out on Willow Springs. From Willow Springs it is an 8 mile hike to the point were the trail crosses the 58. I had hoped to drop some water at the 58 before hitting the trail, but since we were running late that was not happening. So Alice dropped me and 6 gallons of water at the trail head and took off. Figured I’d leave the water for other hikers.

My pack is super heavy. I’ve 5 liters of water and enough food to get me almost 150 miles at what will likely be a 15 mile a day average given the condition of my right leg. This section is notorious for sucking. Very little water, exposed climbs, very windy, lot of crappy sandy trails sucking up each step.

Then I got some major trail magic.

A dude named Legend and Coppertone were setup near the trail serving up spaghetti and smoothies. I was in a hurry to get on the trail, but Legend convinced me to come sit for a few minutes. Glad I did. There was a group of folks there milling around and he offered to slack pack all of us to the 58! Hell ya!!!! I gave him my 43 pound pack, grabbed my bladder, and took off a little after 5.

This 8 mile bit was a bunch of gentle climbs and descents among low hills. The winds here are relentless, hence all the wind turbines. Seems there are all types of the things out here.

The terrain is, well, unremarkable. In my excitement to take Legend up on his offer, I forgot to ask him where he was going to meet us. I think he said something like 9:00. Hmmm. I gave that a couple minutes of worry and forgot about it. I was blasting through the hills with my ~3 pound “pack” and loving it. Some rock artist seemed to agree.

Crossed a bridge on the way down. It was surrounded by white buckets. Trail Magic? Nope, just full of sand. I can tell hikers have opened each one checking. That is just cruel.

At the bottom of the valley, the trail follows a paved road to an overpass. It was getting dark and had not seen a soul yet. Turns out Legend was setup on the North side. The whole crew was there chit-chatting and loading their stuff. Got a picture of Legend before I took off.

I was feeling pretty good, so it was time to do some serious climbing. Put on the headlamp and followed the 58 for a mile until the switch backs start up. The wind was crazy. Started as 20 mph gusts and kept getting stronger. I hooked up with a couple of gals and we hiked for a few miles together. One of them decided to setup a tent halfway up….good luck with that.

The cool thing was a nearly full Moon rose and soon headlamps were not even needed. Passed this dude cowboy camping in the wind tunnel. Looked miserable. Found out later that his inflatable pillow flew off into the emptiness. The wind slacked off a bit near the top of the canyon and I found some good protected spots around mile 570. Setup at 11ish and had a good night’s sleep. 12 miles for a half day, that seems respectable. 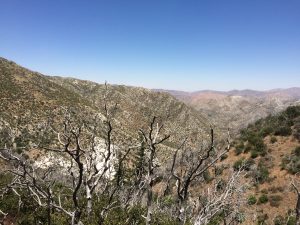 After the crappy night I woke up amazingly refreshed.   Had my bucket shower and feel sparkling clean.   Clothes got washed and dried instantly in the sun.   The school across the street is slinging some kind of soft tostada thing, so that went down the hatch.
It is hiker mania at Warner.   Must have been 30 tents pitched last night in the wind tunnel.  Got a mid-morning pic below.

Chatting with a lot of interesting folks.   Really not that hard to join a conversation.   Just walk up to a cluster and sit down.  I’m lounging around today updating my site and trying to get pics up.   Lots of talk about blisters, plantar facitus (sp?), and sprains.   Don’t like to stick around for those conversations 🙁

This whole place is geared to support hikers.  Folks in the community store are super nice.   Offering rides and pickups.  Someone came by with a box of oranges a little while ago.  I saw two groups go out to the highway and catch rides within 5 minutes of putting their thumbs out.

Plan to head out sometime after 2.   Hopefully the dot watchers will be satisfied.