The important thing about today is real Breakfast.

We hit the pickup point at 9am.   Unfortunately was sat there for an hour waiting for a ride.   First car going the right direction had a gal in it crying her eyes out.  Soho saw it and pulled his thumb in.   Don’t wanna get into that.

While we are waiting around, Soho’s buddy Twigsy shows up.   They were hiking together for several hundred miles in the desert.   Now he has gone through the high Sierra and caught up with us.   Really cool guy.

Anyway, after a while some guy in a beat up toyota pulls up.   Twigsy, Soho, some other hiker, and me all jump in the bed for a roller coaster ride down the hill.   The guy driving says not to lean much against the tailgate.   Uhh…ok.   We managed to survive the trip.

I was chatting with another couple later and they said they too got a ride from a toyota that was pulling an open trailer.   They rode in the trailer.  Now that sounds scary.

While in town we hit a cafe for a couple hours worth of feeding on various breakfast and lunch items.   We are setup in a hostile for the night.   It is a nice dig.   Spent most of the day doing laundry, drinking beer and updating this blog.   Bunch of hikers rotating in and out.   Nice to catch up with everyone.

Getting late and the crew is about to bed down.

I laid in the tent as usual when dawn broke.   What is not normal was that flies immediately started buzzing around in the twilight.   When I unzipped the bug flap on the tent this morning, a swarm of mosquitos started feasting on me.   Man I hate these damn things.

I declared this an area of evil and packed with haste.   Soho was making coffee apparently oblivious to all the insect mayhem.   When I left he was drinking a cup and trying to get service to call his parents.

Today’s destination is Payne lake.  Shortly after hitting the trail I took a couple shots because….well….I have to post something.

Today I have been obsessing over finding some snow to make a Tang Slushy.   The last couple days I’ve seen Snow on the peaks at similar altitudes, but the trail never crosses any.    Same thing happened today.

We have now passed into yet another wilderness name.   This one, however, has me concerned.   Has Trump sold this land to Russia?

So here is an interesting study of misery.   It was around 2pm, super hot, and there is absolutely no shade on this climb of about 400 feet.   Here is a picture of the next 30 minutes of my life in misery.

After precisely 31 minutes, I hit the pass, turned around, and snapped this photo looking back.   Notice that it actually turns out to be much longer.

Then it was a wonderful 1 hour hike through the forest hit by a nuclear blast.

And finally down to the lake

I passed the camp site.   Was looking all over the place and didn’t see a lake.   Checking the maps, it said the campsite was to the east somewhere.   I started bushwacking over a ridge and…there it was.   A beautiful lake surrounded by granite mountains.   It was awesome. 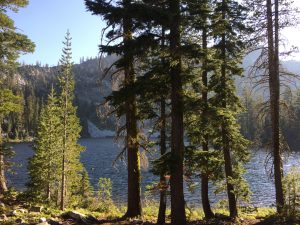 I setup camp and sat down.  Soho showed up and we chilled out with our dinners at about 5pm.   Plenty of time to relax.   A southbound German dude turned up as well.   He was a quirky dude.   He is carrying a violin with him and plays classical when the mood hits him.

Soho and I were munching on our meals when the German dude says he’s taking a swim.   Strips down buck naked and jumps in the water.   Well to each his own I guess.   Seemed refreshed afterward.   I’m just relieved he found his clothes.

It was a light 21 miler today.   I jumped into my tent early and crashed.  Slept almost 12 hours.

Soho and I were noodling on our plan last night.   We plan to stop at Etna (1597) for a Nero and resupply before carrying on to Seiad Valley at 1653.   Thing is that doing another 30 isn’t going to shorten the journey unless we follow up with another 27 and hope for a late night hitch which is unlikely.

Instead it will be a pair of 21 ish milers and a short walk on Saturday morning.

I decided this morning to make it a pseudo-30 day by keeping my pace similar as yesterday.   I will just end much earlier in the day.  I want to see if my body/feet can take it.

For most of the day I could see that smoke getting bigger.   The Airplanes and Helicopters showed up mid-morning and did drops for most of the afternoon.   Found out later from some hikers behind me that they seemed to have put it out.

There was quite a bit of climbing and drops, but at least the trail stayed above 6k.   So much cooler up here and the views are better. 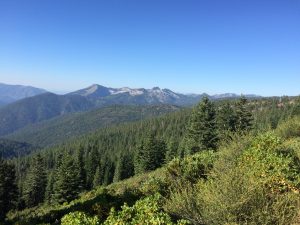 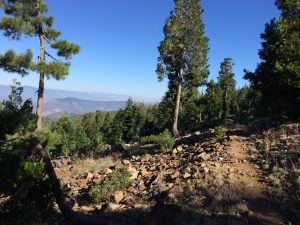 At one of the low points there was an interesting placard about the old stage coach route. 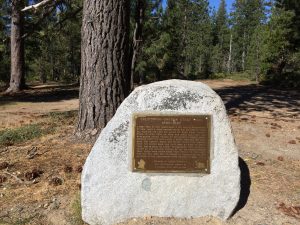 And a posting about a lost horse ?!?!   Seriously?

Entered the Trinity Wilderness.   Not sure how that really makes a difference.   Same trees, hills, and rocks.

This one is looking back toward the fire.   You might be able to spot an airplane flying in there. 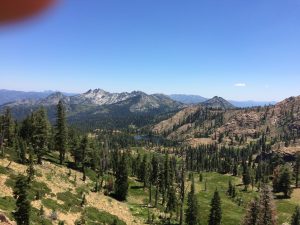 I hit our target camping spot shortly after this picture at around 4:30pm.    I did the miles with several short breaks and a 30 minute lunch.   I felt I could have done another 2 hours with no trouble, so sustaining a longer day should be possible several days in a row.

I am noticing that my feet hurt a lot more that usual.   No blisters, they feel like they are one big bruise.   Going to have to watch that.   More that likely that will be my limiter.

Soho showed up 30 minutes later.   He hikes faster than me, but didn’t see the need to kill himself.   Smart man.

There are flies buzzing around everywhere up here and the mosquitos are eating me up.   Sucks.   There is no water nearby that I know of and we are on top of an exposed ridge.    Saw a lot of cow pies scattered around here, I’m guessing that is part of the problem.   Going to another fast 20 tomorrow.

Alright, so I need to preface today’s hike.   The goal is to do 30 miles, which means that I’m basically on my feet from 7am to 8+pm.   So I can forget about chatting up folks on the trail, etc.   It is just plug in the ear buds and make miles.  There are going to be many more days like this coming up.

That said, I got up, loaded and took off.   Racked the poles and started walking at a 3 mile ish pace.

Soho got out ahead of me this morning.    The views were pretty good. 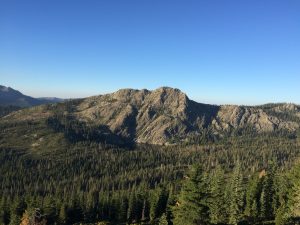 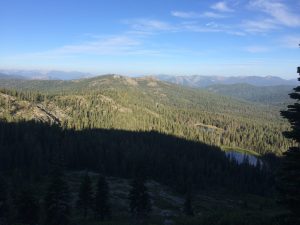 Pre-Lunch was on a big rock along the trail.   I packed in a big block of cheese for this hike.   I carved off a couple big chunks and ate it with my bagel.    Put  mouthful or two of bacon bits on top of the melting cheese.   Yumm…..   I figure I can get a 3 or 4 days from my cheese block 🙂

They are spending a couple weeks on the trail sawing blow-downs off.   They did a little bit of trail clearing as well.   I suppose I can deal with the copious amounts of horse crap I have to step over.   The lady to the right had met Soho a few minutes earlier.   She thought his accent was sooooooo cute.  Aww.    I personally identify best with the mangy dog.  He is definitely at the bottom rung of this operation and seems to know it.

The trail was fairly level and padded with sand and needles.    Not too many rocky bits.

I ran into Soho resting his feet at a spring.   He’s taking a 30 minute break.   WIth my pace, I can’t.   I stopped for a bit then kept rocking.

Around 6:30 or so, it started raining.   Was a few blobs of rain clouds going over which built up to a decent continuous downpour.  Cool thing was that it was very localized.   I put my pack cover on and just kept walking.   Sweat.  Rain.  What’s the difference.

The Sun was still out to the West.   Which gave me this

Got to Cooper’s Meadow trail junction (1549) at 8ish.   There were two south bounders setup here.   One guy was watching the lighting strikes from our spot…which was totally exposed.   Fortunately the storm was moving away from us so I setup.  Soho turned up a few minutes later and we cooked and crashed.

Made my first 30 miler.  I think I sustain this pace every other day or so if need be.   Feeling pretty happy.

This morning Soho arranged a ride from the motel to the trail at 6:15 AM.  As soon as we got dropped I felt nature calling.  Instead of answering the call in a nice porcelain paradise I spent some time squating in the woods.  I need to do a better job scheduling my bodily functions.

Here is the elevations profile of my misery for today.

This climb started easy enough.   Some gradual ups and downs.   Lots of water.   Along the way I passed some gal sitting in her campsite.   She had a fire going and her dog was in her tent.   It was 10am.   So any practical hiker would have been on the trail by now.   I figure this is someone to avoid.   So I say hi and keep climbing.

Found out later that Soho spent a little time talking to her.   She is from Minneapolis.  Came out yesterday to  start hiking North.  Drove out to Dunsmuir and had sold everything.  She has a canvas backpack with no frame and a $400 budget.  She has hiked 8 miles so far.   Glad I didn’t stop.

First bit was in the forest.

Then it began to show some promise.

Then I got some nice views.

There was a bunch of nasty switch backs going up.  Check this out….somebody came up here and stacked all these rocks to give us a trail.

Hitting the top was some easy ups and downs.

Here is a view back on the Crags.   Zoom into the lower right.   That line of trail was the switch backs coming up.   About 3k of gain there.