Alice and I have rented a place in Honolulu for about 7 weeks before we move into our new place in Ventura.    So we are living like residents for a bit.   One of the first thing I did was buy a used mountain bike to do some exploring.   Got a decent hard-tail for $200 and it is holding up pretty well.

Home base is here in Waikiki

Here is what I’ve found so far using a combination of guides, guesses, and occasional trespassing.   Note: Almost all is paved or roughly paved so far. 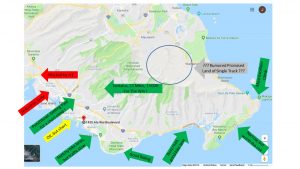 This has been my go-to route for getting some exercise and nice views.   Water up before leaving Waikiki.  You can get some food/water at Hawaii Kai but East of there you are on your own.   No towns, haven’t found a working water tap.

Take swim gear and snorkel.  Plenty of spots to jump in the water to cool off. 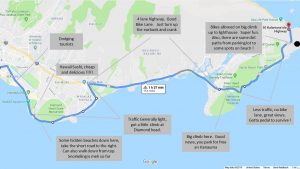 Here are a few pics from recent outings.

This was not one of my best route planning outcomes.   I basically just hooked up with Alice for some food and then heard about the Punchbowl and figured the road called “Punchbowl” would get me there.   I recommend finding a better loop. 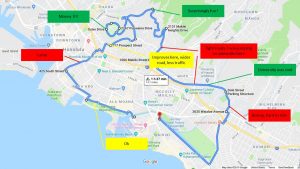 When you get to the top you will find a huge military cemetery and memorial to (mostly) vets from WW2, Korea, and Vietnam.   I find it interesting that so many of the Japanese-American vets have fresh flowers on their markers.   Anyway, here is the view that awaits.

Not everything works out.   Here is an example of where not to go.

There are no pictures.

I’ve included my second route through Tantalus which, according to Google, is only 13 miles.   But these are some hard miles.   This is a 1500 foot climb up into a rainforest and yes, it is raining.   It has that feel like it is wet all the time.    At the top the temp was at least 10 degrees cooler.   Rode through the rain on the downhill, sliding turns and passing cars.    Winning. 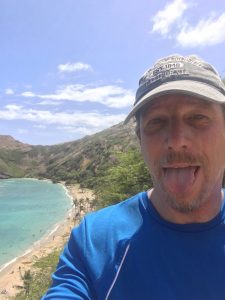