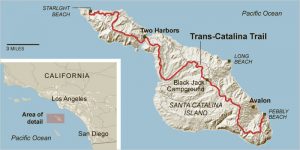 So the plan is for Joe and I to grab a ferry from San Pedro and head to Two Harbors.   We will then do the Trans Catalina trail in reverse of the traditional route.   We’ll hike up to Parsons landing and end at Avalon.   Doesn’t look too rough.   First task is to clean my stuff from the PCT and figure out what needs to be replaced. 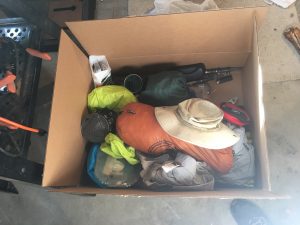 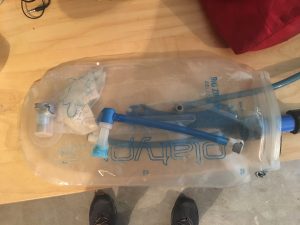 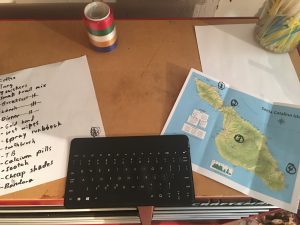 Joe picked me up at 6 and we headed to San Pedro. Light traffic, got a good breakfast before boarding the ferry to Catalina. All aboard at 9:30. 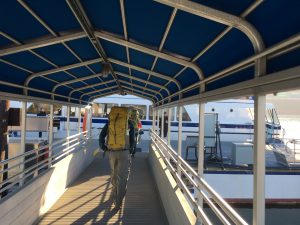 After a stop at Avalon, we were dumped off at Two Harbors. 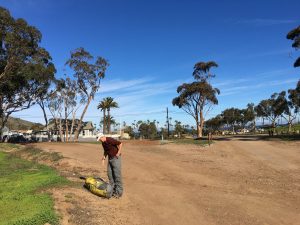 That goes on your Back, Joe

Today’s goal is Parson’s Landing. The hike started with this. 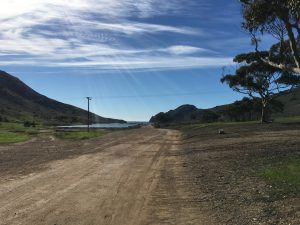 Then it became a steep road 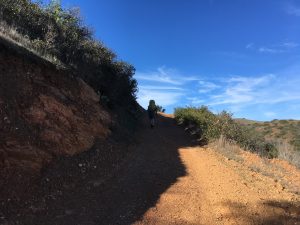 With a bunch of, well, lame vistas.

So the entire day’s hike was road walking…steep road walking. Had a bit of shade from the hills in some places so it wasn’t so bad physically, just dull. Ran into a bunch of these foxes. They are not timid at all. We’d see these critters throughout the hike, including a more personal encounter. Talk about that one in a bit.

Only ran into one group during the hike, while we were having lunch.  Bunch of kids hiking with a couple of Dad’s.  Two younger girls probably 12 ish were blazing the trail. Collecting rocks and soil samples as souvenirs. They were carrying decent sized packs and had twice my energy.  Impressive.  Picking up the rear were a couple of teenagers.

Joe was chatting with one of the Dad’s and he going on about Millennials.  I passed those two when we got back on the trail.  They looked sullen.  Guess they’ve had enough of nature, heh.

Joe put the hammer down on the decent. I didn’t see him until we reached Parson’s.  He was in the pit toilet.  Seems his digestive system was not happy with the sandwich I bought for him at the general store.

Sun was setting so I only took a couple hasty pics.  Nice digs. 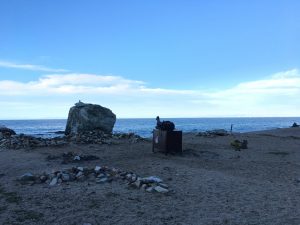 Camping right on the beach with a couple bundles of firewood.  The site filled up quickly with folks.  Apparently there are only 8 sites there, but each has tons of room. The two little girls showed up shortly after, then rest of the troop and the trailing teenagers.  Those kids were running up and down the beach until it was dark.

Excellent night on the beach.  Tent was surprisingly dry in the morning.  We packed our stuff and shoved it into the locker.  First goal was to do a quick hike out to Starlight Beach which is the bookend of the TCT.  Well this turned out to be another road walk with a bunch of sharp ups and downs. 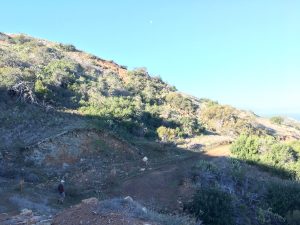 Heard that the new west end road is a bit tortuous so we took the “Old” west end rout.  A bit of the road was washed out, but had some single track around the spot.  We’d already heard the “beach” was an exaggeration.  Near the last steep drop in the road Joe suggested that this was good enough, but I insisted on seeing the thing.  Gotta be true to the trail gods, ya know. 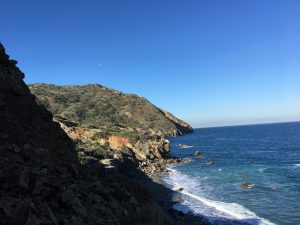 Here’s Joe with a elated grin. 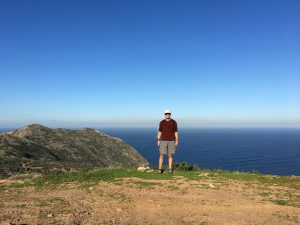 Yeah, pretty disappointing.  Hiked back to Parsons, picked up our packs, and started the west end road walk back to Two Harbors.  Got a little taste of some single track before the 6.5 mile road walk.

We passed a HUGE boy scout camp that is in a valley bordering the ocean. I didn’t take a pic, but this place was enormous. There were fixed tents for hundreds there. Dozens of long boats, probably a hundred canoes and kayaks. All empty for now, but must be busy in the summer. Next day, a hiker and I were laughing about it. We didn’t get that kind of treatment in boy scouts. I built wooden cars and he visited retirements homes. Best we got was a canvas tent in the mud.
Ok, so this road walk had nice views of the ocean and the LA shoreline. But I was in a funk. All we had done was walk on dirt roads. It is an affront to my hiking nature. I was in creative bitching mode. Hot road walking, my trail mix is full of peanuts and raisins with only one or two mm’s, my feet hurt, etc. Joe labeled me Grumpy John. Something about a malfunction in my Amygdala.

Arrived at Two Harbors around 2:00. Here’s a picture from the ridge above. 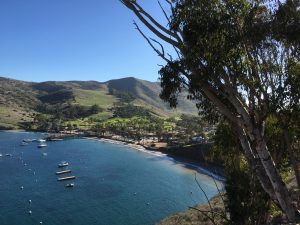 Joe and I had a debate about doing another 3 hours to little harbor. After eating a pretty good lunch and deep into our beers, we finally agreed to stay at Two Harbors as planned. Our campsite was right above the waves, but the wind was coming up. Joe decided to switch to a site further up the hill, which turned out to be a great call. It was crazy windy that night, a guy mentioned that the wind driven swells were 4 to 8. Before we moved, Joe applied his considerable photography skills on a group of campers all dressed in matching PJ’s. I expect those will be a different color in a few days. 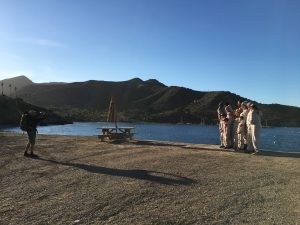 After setting up, we had a good dinner at a bar in town. Some local lady came over to our table to tell us all about the channel islands historical museum that was getting setup in Ventura. We picked up a little history of Catalina from her that was somewhat interesting. So give that one a visit if you are interested in rich people buying islands then letting a bunch of cows loose to trample all over them.

Getting back to our site, I saw a fox run out of my tent. He was inside munching on my crappy trail mix. He left all the raisins on my sleep bag and ate all the remaining mm’s and almonds. My Amygdula was not pleased. Tomorrow has to be a better day. 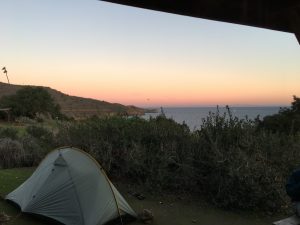 We hit the trail around 7:30.  The first climb of the day was something called Elephant’s Nose. That bit was some good uphill. Fortunately my Amygdula was satisfied with the scenery. The Eastern half of the island is much greener and has better views. Here’s the view from the top 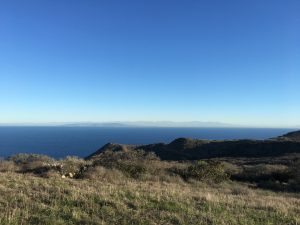 We made Little Harbor around 11. Locals told us it would take 3 hours, we did it in 2.5, so our pace was pretty good. For the first time I felt like I was doing my normal PCT pace. We dropped our packs and I was making some coffee when a couple of kids came over with a plate of chorizo and eggs. That was some righteous trail magic. Chatted with their group for a few minutes about the fishing. They said they were catching a lot of halibut and sea bass from the shoreline.
Joe took off and while I messed around with my gear. My jetboil cup split (again) and I put some more duct tape on it. I think that stove is reaching end of life. Before I left, I stopped to chat with another hiker who was packing up. There was a bison grazing in his capsite. Here he is. 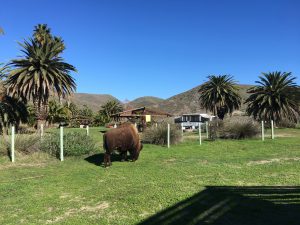 So tunes on and another climb 1600 ft climb to the airport-in-the-sky. Mostly single track until the last mile which was a road walk. Turned out that we missed a bit of the trail that looped around the airport. 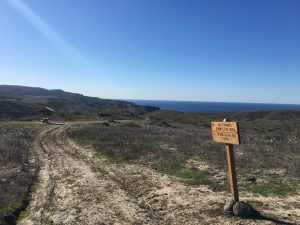 We had lunch at the cafe there. Bison burger, baby. That was meh, but as advertised, the cookies were amazing. Checked out the gift shop there. Bisons seem to be the theme.

The conservancy has reached some kind of agreement with the Marine Corps to improve the runway up there. They had a bunch of equipment setup. Apparently there are no commercial flights in, only private planes, charters, and cargo. Joe heard that a charter flight in/out is $8k. Then the passengers are treated to 45 minutes of twisting dirt roads back to town. So that sounds pretty lame. We saw several island “safari” vehicles driving in and out. Open top Humvees with 4 to 10 passengers and some guy talking…about what I don’t know. Not much material to work with from what I’ve seen so far.

Next it was a ~2 mile walk to blackjack campground. Joe got his water crossing, which we celebrated with a picture. It was 6 inches deep, but hey, now we are really hiking.

Blackjack turned out to be a nice campground. The micro-climate here is interesting. First tall trees we’ve seen outside of the towns. The temps were dropping quickly and, since there was a fire restriction in place, we turned in early. Got the chance to chat with some hikers we had seen a few days earlier. One gal finished the JMT last year, so we swapped a few stories. 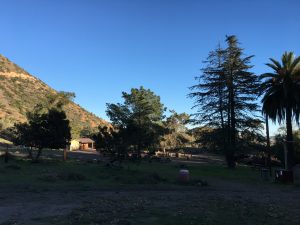 Excellent day. Good trail, saw a bison, got some trail magic, did about 13 miles and ~2.5k of elevation. Joe said I was snoring up a storm that night.

Had a leisurely start in the morning. Breakfast, chit-chat with other hikers. On the trail around 8. Some nice single track to hike in the morning that followed a ridge line. Joe and I were exchanging leads and stayed pretty close together. We lapped several groups of hikers that left earlier that morning, so I think we were keeping a respectable pace. It was a groovy morning. 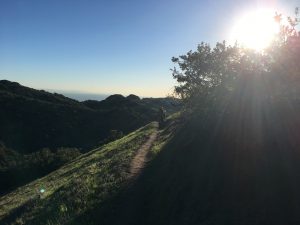 Then we all got bunched up here.

Hmm. So there is this story of a hiker getting gored by a bison last year. Everyone has heard it, though who knows the circumstances. Anyway, that herd is not moving and nobody in our little knot of hikers knows much about the great bison menace. These things are eating away making some kind of gurgling sound like water going down a big drain. Some gal said she read a pamplet that said to stay 100 feet away or risk dismemberment and death. Eventually a consensus was reached and we headed downhill to the left around the herd. I stopped to take a photo of the brown one watching Joe with a hungry look on his face, but I couldn’t get both in the picture. Here ya go

After that we ran into a lone bull standing on the trail. He wasn’t moving either. Down below we could hear one of the safari trucks stop and the guide going on about the Catalina bison. Joe and I toyed with the idea of running into their view making some lewd gesture to the creature. He seemed to want me to do that while taking a video. There is a saying that if you can’t find the stooge at a poker table, then it is you. So I vetoed that idea. We put 20 feet of downhill between his bison-ass while the guide kept yapping away. I think a couple hikers running by the bison might not fit into pitch.

Next it was a bit of road walking then a nice 1200 foot drop on single track to Avalon. Passed a bunch of day hikers coming up the trail. They were getting a good workout. 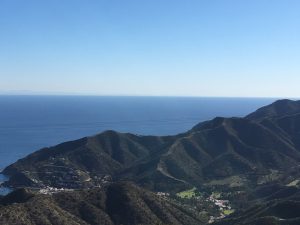 Had a little interlude in a city park. Joe got to re-live his childhood for a few moments. 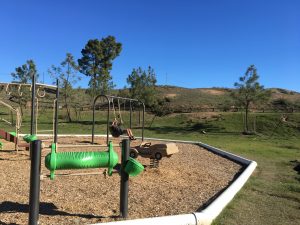 Then it was another mile on the road into town. We were checking out all the golf carts driving around. There are some tricked out ones. Most folks just leave their keys in when they park which kind of makes sense. Where you going to go if you steal one? 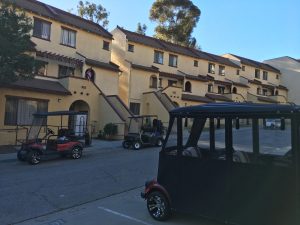 Did about 13 or 14 miles today. Beers, food, and ice cream then the 4:45 ferry back to San Pedro.  Not sure the total mileage on the hike. I read somewhere that the trail is officially 37 miles, but due to the out and back at Starlight it works out to about 53 miles and 9.6k of elevation change. We probably did something like 50 over the 4 days. Good hike, definitely recommend it. 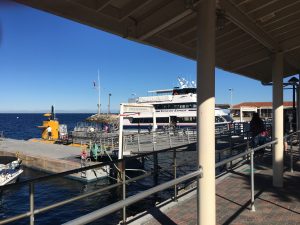