I told ST last night that today would be a late start which turned out to be a little after 7. We packed and headed down to the water tank to load up for the ~6 miler to Paradise Cafe. Mary is the gal responsible for this water stop. She has built up the area a bit more than I remember in ’17. A few picnic benches, lots more water storage, and an expanded book library. Mary was there in the morning so I got the chance to thank her.

Chatted up a few of the hikers milling around then headed out. Nice cool hike to Paradise exit, then a 1 mile roadwalk. ST and I got a table outside and settled in. Shortly after, Patches turned up together with a gal named Artemis. Artemis started on April 27th (!?!) and has been hiking 10 to 12 miles a day. Nice gal and good attitude, but she’s going to need to step up the mileage soon.

Splinter, Graceland and Vincent also turned up a bit later. I gorged on a huge burger, several Radlers, and tied it off with some Apple pie. It was heaven. We all busted out around 2:00 eyeing Live Oak Spring as our next stop.

Patches, Graceland, and Artemis left first, starting the 1 mile walk back to the trail. I thought I’d try my luck with the waitress first asking her how hard it would be to get a hitch. She thought for a moment, then said “well I can give you a lift”. Hah! Not only am I exceeding my mileage goals, but my Yogi (i.e. begging) skills are warming up.

On the way out, we saw the French gal we talked to the night before walking in. The waitress gal will pick her up on the way back. So now we are 15 minutes ahead of Patches. Storm and I were laughing about that…we know he is going ot be pissed.
This section of the trail is new to me. It was closed in ’17. The climb is substantial, we go from 5k to 8k+ in a little over 6 miles.

I cut StormTrooper loose after climbing a bit telling him it was going to be a slow day for me. Took my time. Along the way I ran into about a dozen hikers in several groups that I had not met previously. Apparently we have jumped ahead into the next bubble of hikers. Nice folks, though they clearly prefer to remain tight in their new trail families. The cliques are forming.

After the major part of the climb, I was hiking up and down along a ridge line until the cutoff to Live Oak. The San Jacinto foot hills form a single barrier between the low flat basin to the west and the equally low and flat basin to the east (Palm Springs). On every saddle between the west and east sides, the wind was ferocious. All the level tent sites I saw along the way looked really exposed. Near Live Oak I ran into several groups setting up there, but one look at the permanent bent over trees next to their campsite told me a story of big wind gusts slapping their tents around.

Fortunately or not, the trail to Live Oak Springs and the only water on this stretch is a long 1 mile hike downhill on the east side. Just as I was about to head down guess who shows up? Patches. There is no “Hi howyadoin”. The first words out are: “How the F&^k did you get ahead of me?” Well young man, you need to learn the art of begging !!!!

We arrived around 8 and it was getting pretty dark. Bunch of folks setup camping. Some lady showed me around, cautioning me not to camp under the “widow makers” as she called them (i.e. Dead Trees). Well they took all the other spots, so I told her I’d have to take my chances. She wanted to argue about that which I dismissed by throwing my bag down and unpacking. Lady disappeared. Found Stormtrooper and we caught up for a few minutes. Patches was still grumbling about coming in last. Almost a 15 miler today with 3+ hours of lounge time in the cafe. 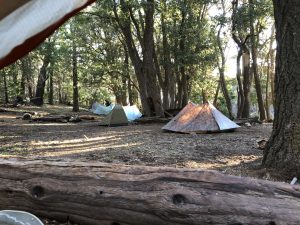