A couple of hikers turned up last night to join us in the bunk room. One guy is a young math teacher from NYC named Taco Cat. I asked him about his name, he said I should think about it first then ask him. I filed that one away and thought about it taking a shower the night before. It spells the same name in reverse. Typical math geek stuff. He is hiking southbound.

The other character is a Hispanic kid named Kickback from San Bernardino. Oh boy, this kid is a riot. He decided to northbound somewhat on a whim in June. He didn’t bother researching much or agonizing over his gear choices. He just got a big pack and stuffed crap in it. The funniest thing he is carrying is one of those 7 pound mesh chairs you might take to a cookout or a parade. He said REI wanted $10 for a lightweight camp chair, so he just went to Walmart and bought this thing for 15 bucks. He has been humping the monster since Campo.

Kickback is meandering up the trail taking his time. When he was near Mojave, he called his buddies and went to Six Flags to ride roller coasters. Later he came out of the Sierras for a resupply and spent 5 or 6 days at a hostel doing odd jobs and smoking an ounce of pot some guy gave him. He is starting to get semi-serious about mileage and is planning to reduce weight soon. No way he is going to get out of California this year, imo, but I think he will eventually turn into a hardcore hiker some day. He just has a great attitude. 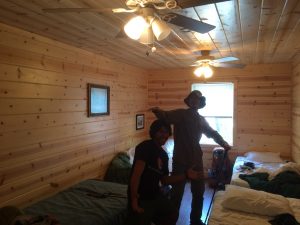 We all had breakfast together. Afterward I organized my food, bought some extra, and setup for the last segment. It will be a 140 mile carry to finish. Most folks resupply in South Tahoe, but I’m going all the way to through. I need all 7 hiking days to finish this by September 15. Fortunately I can dump this bear canister / boat anchor. I’m going a bit light on food, I figure hunger will be a good motivator.

Soho ankle is bothering him again. He says he’ll get his resupply in the afternoon and, if he feels up to it, will leave later and catch up. I know his heart is not in it. He is done. I will finish this hike as I started it.  Alone.  It feels somehow appropriate.

I packed up and headed out to the highway. It took 30 minutes to get a hitch. Nice guy heading up for some day hiking. When I got dropped off, a couple of older guys who are doing a few days hiking came over to ask for help finding the trail. I recognized their car, it passed me earlier when I needed a hitch. Thought about rubbing that one in their face. I got them on the trail, then accelerated away. It was about 11 in the morning.

The trail is mellowing out as I head into the Tahoe area. The amount of vertical is the same, 3 to 5k feet over ~20 miles, but the grade is generally easier. Good place to make miles. 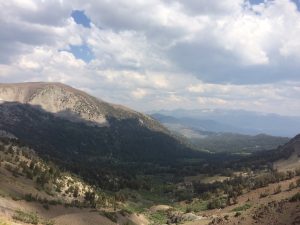 The weather continues its usual rhythm. Blue skies in the morning, clouds roll in early afternoon. Then some thunder and a shower or two. The worrying thing is that the cycle seems to be starting earlier each day. I’m hearing from other southbounders stories of being caught in nasty weather. It all depends on which pass or valley they are in. Some get pummeled others get a few drops. I hope I get lucky.

Ran into the Czech Bam Bam who I last saw in Beldon 45 days ago. He made it up to Washington, then flipped back to do the Sierras. Got a picture this time. Gave him Soho’s number since I’m pretty sure Soho will be hanging around Mammoth over the next week. 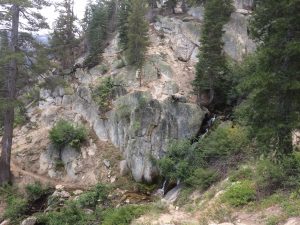 There is a stretch of cow pasture I need to travel through starting at mile 1033. I stopped a couple miles before that to camp.

Oddly, a couple of southies showed up about the same time and we camped together. Leafy and Bull frog. We were swapping stories well into the night. These guys had a good one about 4 days ago when they first met.

They ran into each other on an exposed ridge in a thunderstorm. Lighting was hitting all around them so they jumped off the trail and scampered down a ridge line. They spent the next couple hours huddled under a tarp next to a tree until the storm passed. Guess they did some bonding.

Bull frog has been hiking with his buddy Old Bum who is somewhere behind them tonight. He figures I’ll run into him tomorrow.

Did about 13 miles today. It is a solid start.